New York – Broadway-journeyman Donnie Kehr has announced the release of his solo album Beautiful Strange on January 24, 2023 on ROB RECORDS/JAZZHEADS. 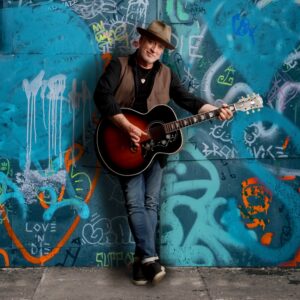 Says Kehr: “These songs are a reflection; a scrapbook of memories in tune. This album is inspired by people and relationships that profoundly influenced my life.  A soul-searching journey to better understand my own heart, the mistakes I’ve made, and the beauty of this strange world we live in.”

Kehr who is best known for his Broadway work (The Who’s Tommy; Billy Elliot; AIDA; The Mystery of Edwin Drood; The Human Comedy; and Jersey Boys) was a co-founder and member of the band Urgent; whose debut album Cast The First Stone (EMI/Manhattan Records) charted on the Billboard charts and featured the singles “Running Back” and “Love Can Make You Cry.”

His film credits include Jersey Boys (directed by Clint Eastwood); Wall Street; Chaplin (with Robert Downey, Jr. and has appeared on TV ln House of Cards; Gotham; Quanitco; and most recently, Inventing Anna on Netflix.

Continues Kehr: “Urgent was a rock band in the 80’s and was a specific genre. However, Beautiful Strange has multiple colors of style and crosses over to many genres. It took 10 years to create this album, I recorded it myself at my home studio in NYC. I grew up listening and learning from my musical heroes. You will hear influences of Sting, Nine Inch Nails, Billy Joel, Elvis Costello, Peter Gabriel, Elton John & The Beatles.”

Kehr is also the driving force behind the PATH Fund who each year present the Rockers On Broadway event; conceived by Kehr and Pete Townshend.

ROB Records is partnered with Jazzheads; and Kehr’s album will be the follow-up release on the label after the successful Rockers On Broadway Live-Volume 1.

Beautiful Strange will be available on all streaming and downloadable platforms worldwide on January 24.

“Beautiful Strange”: A reflection of childhood memories and the human condition.

“Over You”: A Rock song about when you’ve reached your limit.

“Stand Up”: When life Sucks, Stand up anyway.

“Shift”: When you’re stuck, Shift your life gears and keep on moving forward

“Better Late Than Never”: for my dad, who I met later in life, but honored and grateful for the time we shared until his passing last year.