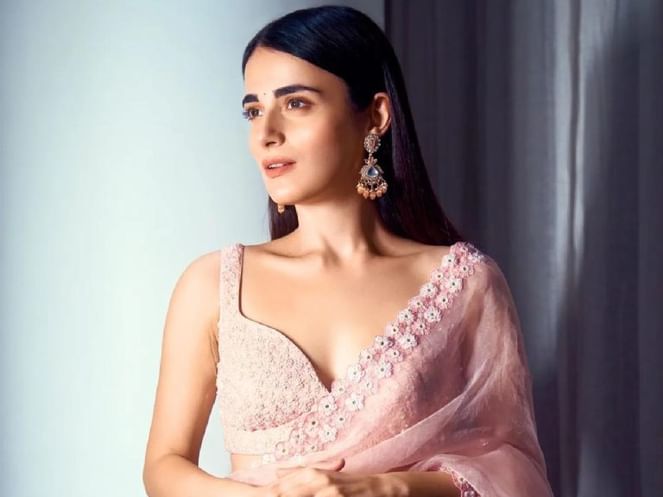 Madan’s statement also disappointed actress Sayantani Ghosh, who in an interview expressed her views on the same.

Producer and director Ekta Kapoor, best known for her iconic soap operas is upset with actress Radhika Madan. In a recent interview, the actress recalled her days working in television and spoke out against the industry’s work culture. She claimed that she worked for 48-50 hours and that the directors would make changes at the last minute. Kapoor slammed Madan calling her statement “sad and shameful.”

In an interview, the Angrezi Medium actress said that whenever she would ask for a script for the show she was working in, she was told, “Aap set pe chalo, script garma garam aa rahi hai.” She also said that directors would be replaced at the last moment depending on whoever was available, and they would reject any inputs that she had.

Her statement also disappointed actress Sayantani Ghosh, who in an interview expressed her views on the same. The Naaginn actress in conversation with Siddharth Kanan said, “We also have Mouni Roy, she is a dear friend of mine, and in the interviews, I have listened, there is a certain grace that she began her career from TV, that I didn’t find in Radhika’s clip. She and many others look down upon TV, you shouldn’t do that, I feel. My problem is don’t treat TV as a stepping stone,”

Soon after this Kapoor shared Ghosh’s interview clip on her Instagram story and praised her. She wrote, “Sad!!! N shameful actors have no respect for their roots kudos @sayantanighosh0609.” 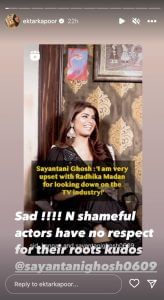 On the work front, Madan made her Bollywood debut in Vishal Bhardwaj’s Pataakha with Sanya Malhotra. She recently appeared in Kuttey alongside Arjun Kapoor, Tabu, and Naseeruddin Shah.