Happy families are all alike; every unhappy family is unhappy in its own way. To Leo Tolstoy’s famous opening line, I’d like to add a non sequitur – conflicts are bad enough, but conflicts within families are the worst of all.

The ultimate conflict between cousins Kauravas and Pandavas led not just to 18 days of bloodshed on the Kurukshetra battlefield, but also to the biggest moments of truth (and strategic untruths), moral dilemmas, transformational life decisions and the war between dharma and adharma.

We face smaller versions of such moral dilemmas in our daily lives – lives that are often riddled with conflict, questions of righteousness and virtue, even more profound questions on the very purpose of our existence. But usually, we brush them aside, caught in our busy rhythms of daily life, work, home, children, groceries and laundry, office politics, love, hate, resentment and politics among our own extended family. 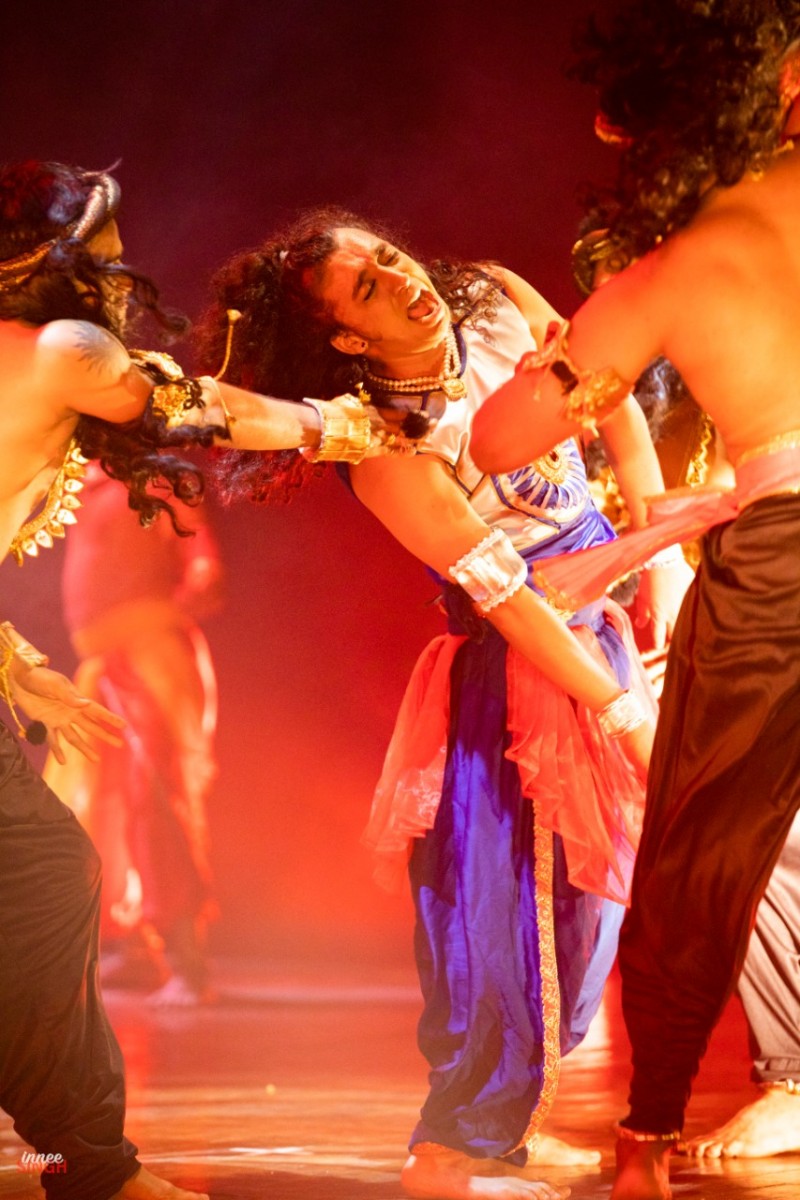 Most of us have grown up in India hearing stories from the epic cult classic, the Mahabharat – and many of us will have a relative as jealous as Duryodhana, or as canny as strategic Shakuni, or even one like Bhishma, upright to the point of rigidity. We know wives who seem as dramatically devoted as Gandhari and women as strong and intelligent as Draupadi. But very few of us are blessed with the sort of relationship that Arjun and Krishna had. Krishna was not just Arjun’s friend, philosopher and guide but also his cousin, his charioteer and his conscience, navigating him through the battlefield that is life itself.

To be able to access such wisdom, arrive at such supreme truths, access such deep thought and get answers to profound questions is the ultimate gift – and in many ways, the crux of the Mahabharat.

Imagine if we too were equipped from an early age to be able to navigate our dilemmas with ease, develop and follow our moral compass, be able to answer to our conscience with honesty and resolve our conflicts with righteousness, empathy and dharma? Or access a toolkit that makes this possible?

Well, for 90 minutes on a cool December evening in Delhi, you can. Or at least, you can immerse yourself in the original moral dilemma, the fight between dharma and adharma in an 18-day battle between cousins, as much mighty warriors as flawed human beings. And learn from it, including from the eternal spiritual wisdom of the Bhagavad Gita. What’s more, if you have children you despaired of ever getting interested in India’s ancient classics, this is the best portal to send them through.

After sold out shows in Bengaluru in 2019 followed by a COVID-induced pause, Prabhat Pratishtana, a storied Bengaluru-based trust (whose founders are direct descendants of poet-philosopher Purundara Das, who was also one of the chief founding-proponents of Carnatic music and a singer-composer himself) have finally managed to bring to the Kamani Auditorium on December 2, 3, and 4 an authentic version of the Mahabharat’s Kurukshetra war.

The nearly 60-person troupe includes more than 40 artistes trained in Bharatanatyam, Kathak, martial arts and the 108 key karanas from the Natyashastra a well as contemporary dance and a technical team of around 20, trained in animations, costume, make up, lighting, magic tricks and sound design.

Scripted by young Sanskrit scholar and Harikatha exponent Sharat R. Prabhath who studied Ved Vyas’s original Mahabharata in pre-Panini grammar and curated specific scenes from it to include key characters from the epic, he and his older brother Bharat have created a musical dance drama extraordinaire, called 18 Days: Dusk of an Era.

The brothers took two years to execute this unique musical dance drama. Although first performed in 2019, two years after they formally started its research, the actual incubation of this dance-drama began years ago, in the lap of Sharat and Bharat’s maternal and paternal grandparents.

“We were 64 family members living in a joint family, all of us artistes, in the tradition of Haridasa and Bhaagvad devotional singers, dancers and performers,” who make the difficult Sanskrit tenets of the Bhagavata Purana accessible to everyone in simple language, melodious songs, dance and theatre, says Sharat.

“My earliest memories are of listening to stories from the Mahabharat by my grandmothers and dancing and singing to them.” 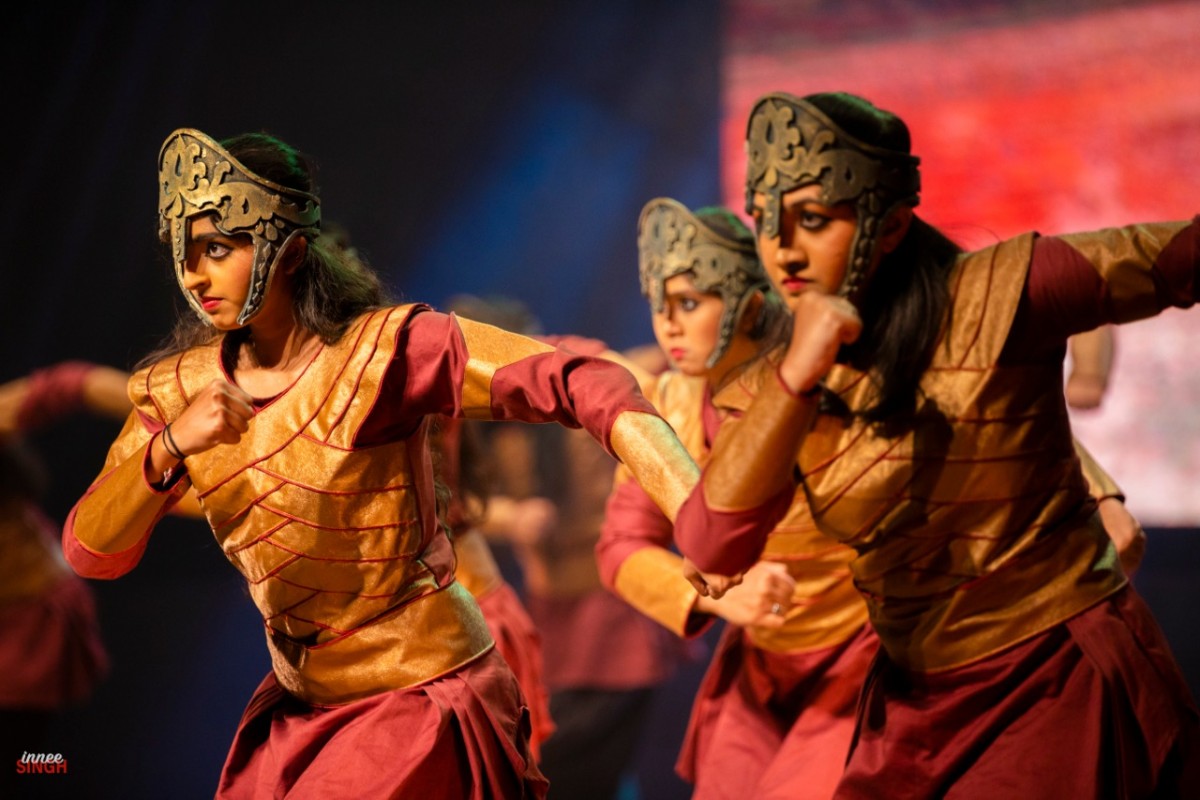 Adds Bharat, “Their descriptions were so vivid, so full of visual details – we wanted to authentically re-tell these stories in the most effective way.”  So together – and with the help of experts and scholars on the mythological epic – the brothers asked questions, decoded and unravelled layers of knowledge, binding their own understanding with the expertise of those who had studied these texts for even longer; scholars, field experts and academics.

“We wanted to transfer what we had imagined when listening to the stories and reading the text, into actual visuals,” says Sharat describing how Krishna and Arjun descend on stage in their chariot  from high up in the air, their curly locks flying in the wind – all done through special effects. So they have ended up showing, not telling – which basically leaves much of the interpretation up to the viewer, which is how it should be. “There are too many interpretations – rather, mis-interpretations, of this epic. Versions that romanticise Karna, idealise Gandhari or villainise Duryodhan. We didn’t want that. We just want to present what Ved Vyas wrote,” says Sharat.

When they performed this multi-media show in Bengaluru’s Ravindra Kalakshetra in 2019, the four premium price-ticketed houseful shows of 1,000 capacity each were completely sold-out. Eighty-year old Bengaluru resident Prabha Sankaranarayan, who couldn’t get tickets for the shows and travelled to Delhi to see it, said, “The choreography of the warriors on the Kurukshetra battlefield was fantastic.”

The young artists have woven together mythology, technology and classical Indian art forms in a singular manner and embedded it with animations, audio visuals, levitation and aerial techniques, elevating it to a Disney-esque scale rarely seen before. But the real beauty is in how it remains so firmly grounded in Indian classical dance and martial art forms with Hindustani and Carnatic classical music serving as the tapestry on which it has been hung.

“We have used authentic 3,000-year-old movement vocabularies from the Natyashatra and  incorporated real war cries and war syllables taken directly from the scriptures – something never done before,” says Sharat. “I recognised the karanas from the Natyashastra,” attested classical dancer Gitanjali Puljal after the show. 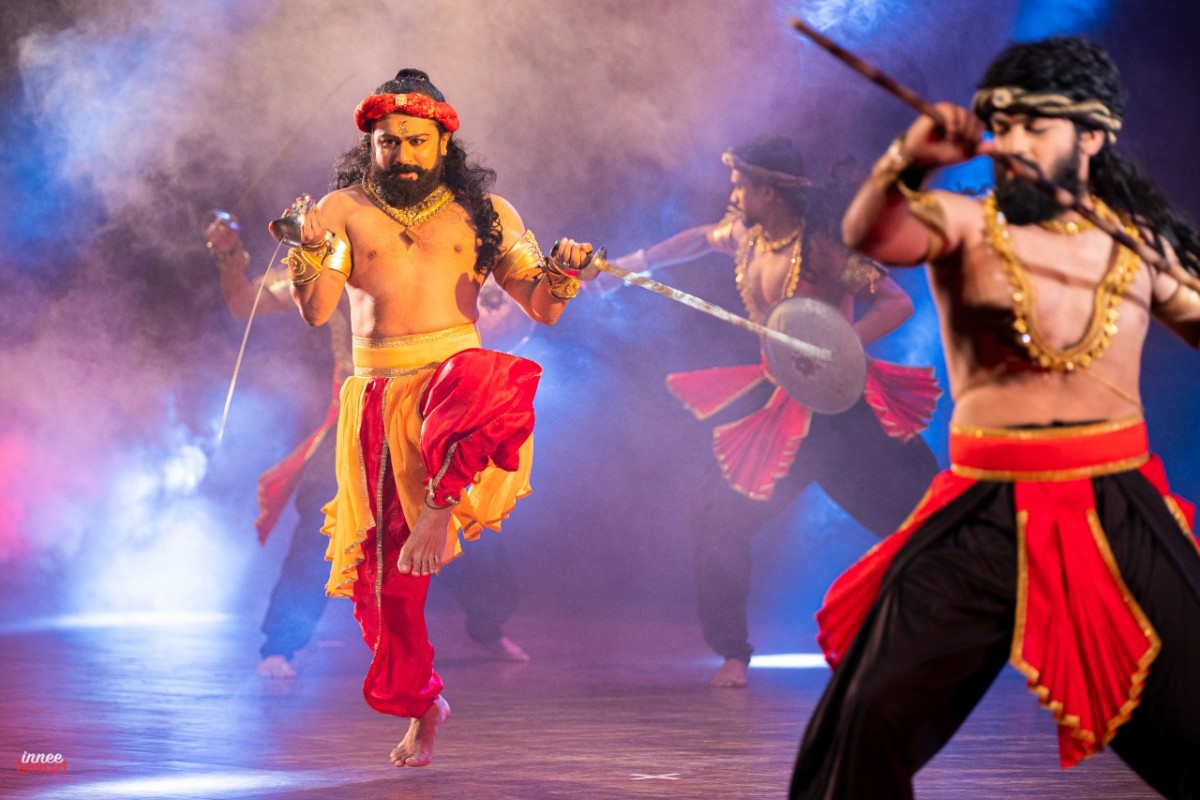 “I could see original movements from Kathak, Bharatanaytyam, Chhau, Kalaripayattu…it was beautifully melded and choreographed.”

Kalari moves were showcased in the spectacular scenes leading up to Ghatotkach’s death, in which the presence of children was incorporated to depict the sheer physical scale of Bhima’s demon son, a clever move that also brought smiles to the faces of the audience.

“18 Days…was magical, to say the least. It was like watching an international presentation of our epic,” wrote dancer and educator Pratibha Prahlad on Facebook. “The familiar visuals…were presented powerfully (and were) breathtaking, using extraordinary stagecraft and lighting. Bharat and Sharat Prabhat are young geniuses and their work needs to be seen not just in all Indian cities but abroad too.”

“This is real movement translation of Natya Shastra!” Padma Bhushan Dr. Padma Subrahmanyam, a reconstructor of the Natyashastra, said.

“They (the Prabhath brothers) are the pride of India and Art is in safe hands!” said film actor and director Upendra.

There were more personal reviews too.“I have learnt many things that I can adapt in my life and the entire media industry!” Zee Kannada’s channel head Raghavendra Hunsur said. 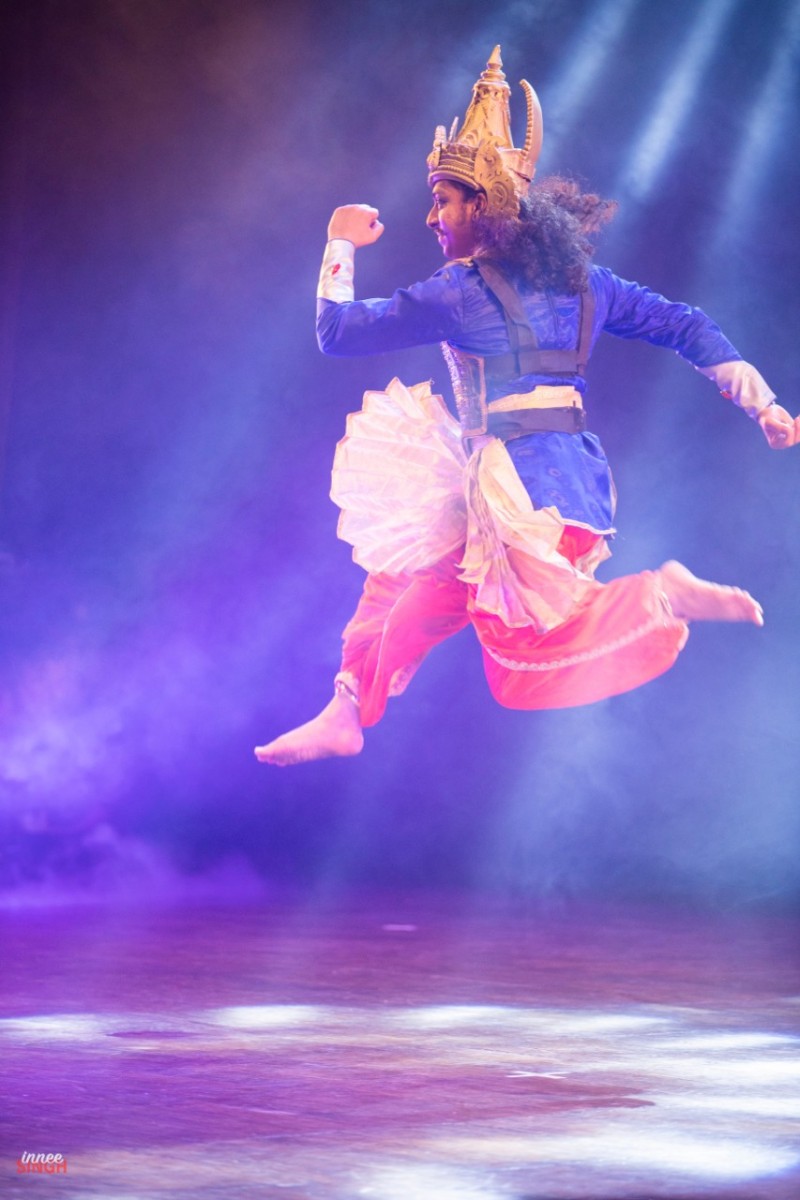 From script to execution

These shows will help preserve ancestral works handed down as oral traditions for generations and promote Indian arts and history in an accessible way, Union culture minister Meenakshi Lekhi said, praising the performance. Perhaps this is why the Indian Culture Ministry gathered this event under its umbrella of ‘Azadi ka Amrit Mahotsav’.

The troupe will open the upcoming Serendipity Arts Festival in Goa on December 15, before which it will also perform in Bengaluru again on December 9 and 10.

However, this artistic adventure took time in the making. In the period it took to create the first draft of the script, the troupe went through four months of intensive training in Indian martial arts even as a set of technicians and illustrators created 3D models, computer-generated images and animations. Then came the composition of music scores – 1500 original tracks – with live instruments followed by six months of choreography and rehearsals. To this was added the final layer of state-of-the-art-technology, lights, magic tricks, levitation and aerial techniques.

“We had to make it visually impactful. All the characters are larger than life personas – we had to show them that way for people to connect with them, celebrate them,” says Bharat.

Every script needs a hero. And every hero needs a villain. So Sharat, who has an MA in Sanskrit – and has not just read the Mahabharata in its original form but has taken feedback from several scholars who have studied it in depth – added Shakuni to the narrative thread as the antithesis to Krishna. “They were both strategic. But for opposing sides,” says Sharat.

Shakuni’s brief appearance on stage was dramatic and outstanding.

“We want to immerse the audience into that day and age, as if they are at Kurukshetra, able to see what was happening,” said Bharat, who is the artistic director and technical brain behind this production and has also done the stagecraft and costumes.

Sharat is the Krishna to Bharat’s Arjuna and has composed the original music score. And despite lumbar and sacral injuries to his back, plays the demanding role of Krishna. “Like Him, I have to be calm. All will be well,” he says serenely.

Jyoti Pande Lavakare is an independent journalist, the co-founder of ‘Care for Air’ and the author of Breathing Here is Injurious to Your Health.